What is Measles, symptoms of measles in children, how the measles virus occurs in children.
Measles is an acute infectious disease characterized by fever, catarrhal phenomena from the upper respiratory tract (cough, runny nose , hoarseness of the voice), inflammation of the mucous membranes of the eyes, mouth and the appearance of a red large-spotted rash on the skin. The causative agent of measles is a virus. Small droplets of sputum, mucus and saliva of the patient containing the virus , when coughing, sneezing and talking, get into the air, are easily carried around the room, neighboring rooms and apartments. The virus enters the body of a healthy child through the respiratory tract( airborne transmission pathway).
Almost all people are susceptible to measles, and those who have been ill form a stable lifelong immunity . The infection occurs even in a fleeting contact. More than half of the cases occur in children under 5 years of age. Children under 3 months of age usually do not get measles, they are transmitted immunity to the disease from the mother who had measles in childhood. Children born to a mother who did not have measles may also get it in the first months of life.

There are four periods of Measles disease.

The first-incubation (hidden) – lasts 6-18 days. During this time, the Measles virus can be present in the human body without causing any symptoms of the disease.
The second period – coming after the hidden one-lasts 3-4 days.
Children have fever, runny nose , cough, hoarseness of voice, red eyes, watery eyes.
Gradually, these phenomena increase, photophobia, puffiness of the face, barking cough occur, and laryngeal lesions may develop with the appearance of croup. This period is characterized by the appearance of delicate, small white spots, surrounded by a red rim, on the mucous membrane of the cheeks against the lower molars. They appear 2-3 days before the rash and disappear on 1-2 days of the rash. Children are irritable, they have a deterioration in sleep, appetite, sometimes frequent stools, bowel movements become liquid. 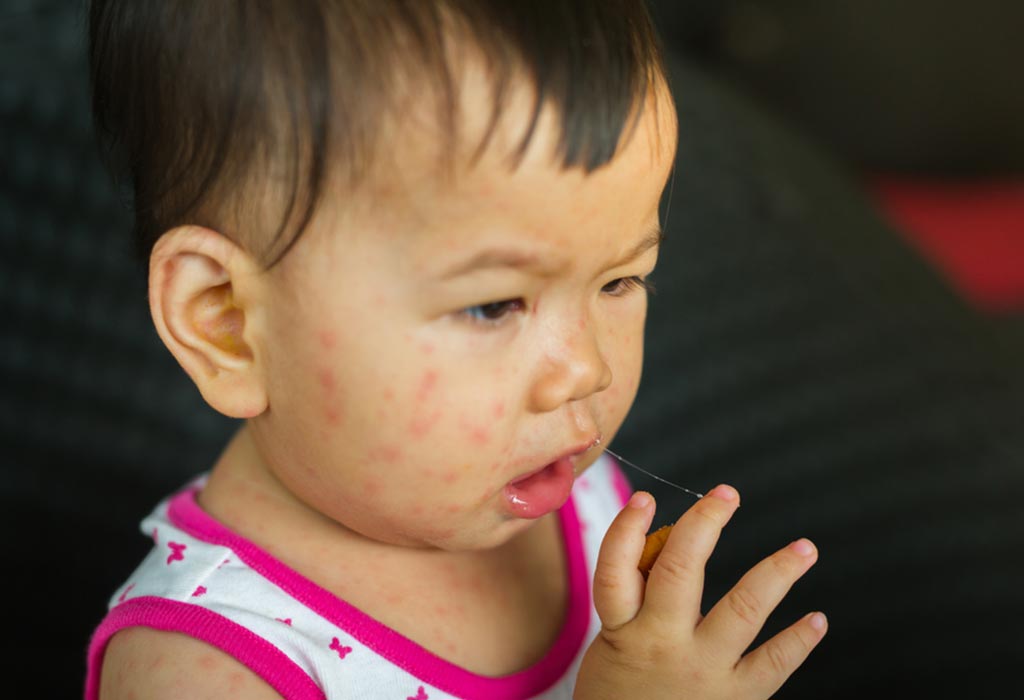 Older children with the Measles virus may have headaches, vomiting, nosebleeds, and abdominal pain.

The third period (the rash period)begins with a new rise in temperature, deterioration of the condition. On 4-6 days from the onset of the disease, a characteristic red large-spotted rash appears. It occurs first on the face-behind the ears, on the cheeks and on the forehead, and after a few hours it spreads all over the face.
Becoming more intense, the rash covers the torso and limbs. The skin is moist, there is a slight itch. This period lasts 3-4 days.
The fourth period is recovery. The rash first on the face, and then on the trunk and limbs fades and turns into spots of light brown color, which last 7-10 days. The skin becomes dry, there is a bran-like peeling. The temperature gradually decreases, the General condition of the child improves.
The course of the measles virus in children can be either mild or severe. With a severe course of the disease, severe headache, persistent vomiting, nosebleeds, and in some cases delirium and hallucinations are possible. Measles can be complicated by inflammation of the lungs, larynx, inflammation of the middle ear ( otitis), and disorders of the gastrointestinal tract.

At the first signs of the disease, you should call a doctor. In the treatment of measles, General hygiene measures , diet, and care are of primary importance. The patient should be in a well-ventilated room with a moderate temperature. Medical treatment is prescribed by a doctor.

What you should know about the Measles virus in Children:
1. Measles causes a significant decrease in immunity. That is, against the background of measles, it is very easy to catch another infection (usually bacterial). Therefore, cleanliness and limiting contact with other people should be given priority;
With measles, there is a sharp decrease in the content of vitamin A and vitamin C in the child’s body, which can contribute to complications. The use of these vitamins during illness is mandatory, but it is better to start already when there is only a threat of getting sick – for example, in kindergarten one of the children has measles;
2. a child With measles is infected 1-2 days before the first signs of the disease and ceases to be so 5 days after the rash appears;
3. Vaccination against measles is, in essence, an artificial infection of a child with a virus, but it is very weak. Approximately 10% of children from 6 to 20 days after vaccination may have mild reactions in the form of fever, and sometimes the appearance of conjunctivitis and a mild rash. These symptoms persist for 2-3 days, after which everything goes well – simply put, the child tolerates a very mild form of measles. It is fundamentally important that if any signs of measles occur after vaccination, the child is absolutely not contagious and can safely visit the children’s team.